published by Studio 3DO in 1995, developed by 3DO, running on Windows
type: shooter
perspective: 3rd person
player options: single player

In the future, organized crime controls the galaxy. Is there anyone who can stop them? Meet Captain Quazar - an up close and personal 3/4-overhead shooter that doesn't take itself too seriously.
Captain Quazar has all the firepower, you'll supply the brains as you travel the galaxy to root out the evil crime lords that have taken control. Everything in this huge galaxy can be blown away, but be careful where you lay waste, because you have to manage your resources to survive. Huge levels range from volcanic moons to spice mines, with non-stop enemy action and over 2000 frames of comic book style animation.

Interrogate the thugs you capture to learn about hidden levels and secret areas - before you fry them, blow them up, or electrify them. With a huge stockpile of weapons at your disposal, you have to be choosy when you take a trip to the Armory. It's up to you to compose a strategy to make Captain Quazar succeed. Intense action with a refreshing style all its own: Captain Quazar, arriving soon on a world near you. 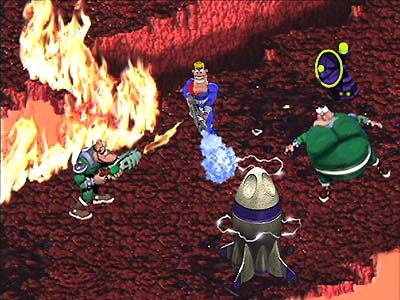