Conquest of Elysium 3 is an old school turn based fantasy strategy game. You start by choosing one of 17 different characters, e.g. Necromancer, Demonologist, Dwarf Queen, Troll King or maybe a High Priestess of Ba'al. The different character classes vary wildly in what special abilities they have and what parts of the world they should focus on conquering. E.g. the Demonologist needs sacrifices that you gain from towns and villages, but the Druid want special herbs that are found in forests. But of course gold is always good to have, so all classes can make use of a gold or silver mine, but only the Enchanter can make a Gold Golem out of it.

The Witch can use fungus to summon a Catoblepas whose gaze can annihilate an entire row of enemies per turn. The Demonologist can summon powerful demon lords, but only if he is reckless because the likelihood of a demon lord attacking his summoner is quite high. Careful Demonologists make use of the lesser summoning that are also powerful when compared to mortal men. The Warlock can summon an immortal Phoenix. The Phoenix explodes when it dies and then swiftly reforms in the home citadel of its owner. In short the main thing about this game is the amount of features and special abilities that can be used.

Here is a list of some features that are available in CoE 3.
* Many monsters and many special abilities. Some examples right below.
* Assassins that make an assassination attack before combat starts.
* Catapults, Hill Giants and Rocs that can throw or drop boulders during sieges.
* Immortal Liches and Vampires.
* Regenerating trolls rise from the dead if they haven't been killed too badly or their side lost.
* Large worms that can swallow smaller enemies whole. Swallowed units take a few points of damage from digestion each round until they are freed.
* And many many more monsters....
* New weapon system, attacks are divided into pierce, slash or blunt damage (magic attacks have other types too). Skeletons are difficult to injure with piercing weapons and you should preferably use slashing weapons against treemen, etc.
* Hotseat and network support for multiplayer games.
* Team play, you can be 2 players against the AI for example.
* Random maps.
* 17 different classes to choose from. And they are quite different from each other, both in what resources they need and what kind of rituals or special abilities they have.
* Spell system with currently 42 magic paths.
* Magic items.
* Permanent battle afflictions.
* Horrors.
* Stealth and invisibility. Scouts needed to detect stealthy troops, something better (a star spawn or a beast bat will work) needed to detect the invisible ones.
* Shape changers that looks like something else when seen by the enemies. 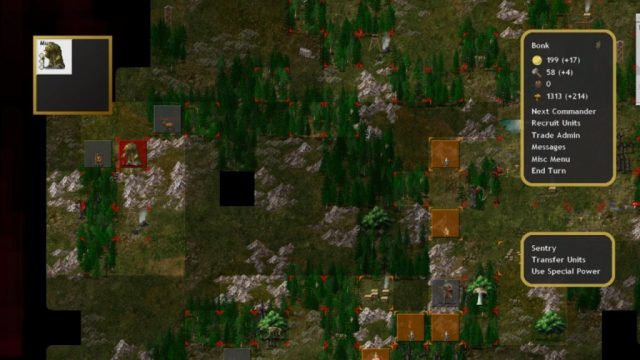