The universe is under attack by something from an alternate dimension, and only THE FIFTH ELEMENT can stop the invasion. Take control of Leeloo and Korben Dallas as they travel through 20 levels of action and excitement while trying to save the world. Both characters have special skills and abilities that are required to successfully navigate the game's varied stages, and you'll have to master both to be successful. Discover the truth behind THE FIFTH ELEMENT and save the world.

# 2013-09-23 18:07:25 - official description
Based on the hit movie of the same name, the Fifth Element is an adventure that is out of this world. You'll need to play both the role of the alien born femme fetale and the taxi cab driver, turned hero in this fast paced game that has you solve puzzles and fight it out with the enemy.

version of
The Fifth Element (Windows) 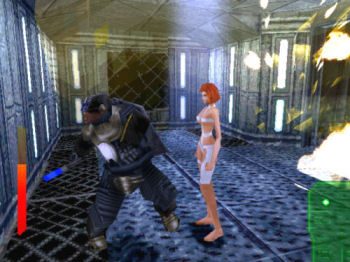