The Legend of Zelda: Ocarina of Time

Released to an eager audience in 1998, The Legend of Zelda : Ocarina of Time became an instant smash and quickly established itself as one of the greatest games ever made.

As legendary hero Link, you must journey across Hyrule, and even through time itself, to thwart the plans of Ganondorf. You'll wield weapons and gadgets, battle enormous bosses and solve brain-busting puzzles, which are among the best ever seen in the Zelda series.

But the appeal of ‘Ocarina' lies not only in its cinematic visuals or groundbreaking combat system; it also impresses with its epic storyline, memorable characters, superbly designed dungeons and rich variety of gameplay. Quite simply, it's a masterpiece!

# 2007-08-13 09:28:11 - official description
The Legend of Zelda: Ocarina of Time reveals the genesis of the fantasy land of Hyrule, the origin of the Triforce and the tale of the first exploits of Princess Zelda and the heroic adventurer Link. Vibrant, real-time 3-D graphics transport players into the fantasy world of Hyrule. The quest takes them through dense forests and across wind-whipped deserts. Players swim raging rivers, climb treacherous mountains, dash on horseback across rolling hills and delve into dungeons full of creatures that fight to the finish to put an end to their adventures. With immersive graphics, a sweeping story line, swashbuckling adventure, mind-bending puzzles and a touch of humor, The Legend of Zelda: Ocarina of Time is one of Nintendo's most epic challenges ever.

# 2007-02-27 21:00:29 - official description
As the first fully three-dimensional title in the Zelda series, players must take on the role of a young boy with a grand destiny growing up in the Kokiri village. The young hero, Link, soon finds out that something is afoot when he is dispatched on an epic adventure by the Great Deku Tree. On his travels Link discovers he is destined to become the Hero of Time and save Hyrule from the evil Ganondorf. His travels take him across a vast and colourful continent as he battles through challenging dungeons - ranging from the eerie Forest Temple to the fiery caves of Dodongo Cavern. With hours of exciting gameplay this title is sure to keep even the most dedicated player busy for weeks.

Unique to the Zelda series, Ocarina of Time sees players taking on both the role of child Link and his young adult form. When he begins his journey, Link is an eight year old boy in an as yet untainted Hyrule. However, when he uncovers the fabled Temple of Time and the legendary Master Sword Link is too young to take on the role of Hero of Time so is transformed into a young adult. During this time Hyrule radically changes into a darker and more dangerous place.

Deku shrubs are pretty timid and a variety of attacks will make them surrender. But the quickest ammo free solution is one ground pounding swing with the Megaton Hammer

The fifth in the Zelda series, this game takes place before all the others. The graphics are quite impressive, the story, although known to all Zelda gamers, is put in quire well, and the gameplay matches the value of any Zelda to date. A very good 3D translation for a well done game. Zelda fans will not be dissappointed with all the features this game has to offer.

Although it's not quite 'Game of the Century', Zelda: Ocarina of Time is a thrilling adventure from start to finish. It has huge dungeons, hundreds of puzzles, fun boss fights, and many secrets to uncover, all enveloped in a gorgeous 3D environment. It may be cliche to say this, but Zelda 64 is easily my favorite N64 game.

sequel of
The Legend of Zelda: Skyward Sword (Wii)

has this MOD
The Legend of Zelda: Ocarina of Time: Master Quest (N64) 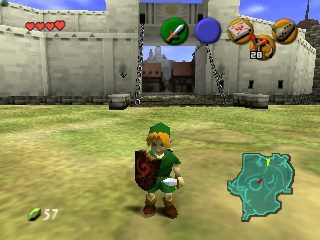 The Legend of Zelda: Ocarina of Time in-game screen.