In this first-person adventure, you'll need to take on a host of alien bad guys. You'll have over 10 different weapons at your disposal and you'll fight through many different types of environments. You'll need to be at the top of your game if you hope to survive the swarm alive.

Xenogears, another RPG from Squaresoft, breaks many old rules. The game contains nearly 20 minutes of voice-acted animated sequences, as well as one of the most complex plots ever seen in an RPG. Fei Fong Wong must come to grips with the fact that his past ties together with the same villain that is chasing him. The battle system is simple yet elegant, as are the graphics. The characters are 2D sprites that exist in a 3D world. Each aspect combines to form one of the most amazing RPG experiences ever.

One fateful day, a starship passing through a distant star system suffers catastrophic malfunctions due to a sudden takeover of its computer systems by an unknown intelligence. Left with no other options, the captain triggers the self-destruction system in order to prevent the total takeover of the ship. As the explosions consume it, the starship breaks up and the resulting debris find its way to a planet in the system. Thus begins the story of Xenogears. Hundreds of years after this incident, we find a world engulfed in war. The prizes at stake are the technological wonders from centuries ago that give their possessor the power to overcome their neighbor in the struggle for dominance. Integral to this struggle, and an example of the technology at stake, is the discovery of giant humanoid robots through underground excavation. These metal behemoths, each as powerful as an army of men, rule the battlefield through sheer size and firepower. The true beginning of our story however, takes place away from the centers of power, and in a small village on the border of two nations at war.
Fei Fong Wong, our protagonist, is forced to leave his home after a surprise attack by a giant robot team which ends in the destruction of his hometown. Adopted by the village elder as an orphan with no memory of his past, Fei's life up to that point had been an idyllic existence. The loss of his home and friends forces him to strike out on his own for the first time. What began as a struggle to survive though, becomes a quest for identity as Fei's mysterious past catches up to him. During his journey, Fei will meet various other characters with pasts as mysterious as his own. Facing opposition on all sides, Fei and his friends have no choice but to stand together in order to survive.

One of my all-time favorite RPGs. This is just about as perfect as it gets. Amazing story, awesome characters... oh, and being able to fight in both human and robot form is pretty darn cool. Also, the Xenogears Battle Arena is one of the best 'mini-games' within an RPG, IMO. Unlike some RPGs that're just bogged down with tedious and dull mini-games *ahem* Final Fantasy VII. The only thing I didn't like about Xenogears was Chu Chu. Chu Chu is this cute furry pink hairball that just didn't fit into the game at all. It's almost as if it was just there for the sake of having something cute.

Good news for purists--there's an unofficial patch that tries to restore the US version to the Japan version as much as possible. Includes Japanese voices with subtitles, restores the battle/control system to the original Japanese version, etc. Check the Xenogears 2.0 homepage for details.

has influenced
HEART FORTH, ALICIA (Linux) 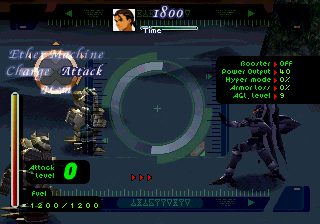