Doom launched First-Person shooters as one of the dominant genres in PC gaming(although Wolfenstein 3D had established the genre), and also launched the PC as a viable gaming platform
Superb level design, well-designed weapons and truly frightening atmosphere. The pseudo-3D levels (Doom's engine didn't allow for levels to be multi-layered) were the best looking and immersive of the time and are still enjoyable today.
Also one of the PC's most copied games, its influence rings true in the vast array of First-person shooters. This has been both a blessing and a curse for gamers, as unimaginative and poorly executed Doom-clones swamped release schedules in the mid-to-late 90s.
Doom was originally released as shareware, allowing Doom to gather a massive following very quickly.

Think back and feel the atmosphere again that was hanging around your DOS machine when it was playing those sinister midi files... what a game!

npc strife - they don't do this automatically, but will beat up their allies if subjected to friendly fire. This is a "feature" repeated in many games using the Doom engine.
possessed - the humans you encounter are controlled by demonic spirits or some such, not zombies or anything.

Sanguine # 2009-01-14 06:50:35
DoomEd as well as the DOS version of DOOM were developed on a several platforms running NeXTSTEP 3.3. NeXTSTEP's design didn't really care if these systems were 68k, x86, or PPC:
Quoted from John Romero:
In fact, with the superpower of NeXTSTEP, one of the earliest incarnations of DoomEd had Carmack in his office, me in my office, DoomEd running on both our computers and both of us editing one map together at the same time. I could see John moving entities around on my screen as I drew new walls. Shared memory spaces and distributed objects. Pure magic.

was remade as
Boom (MS-DOS) 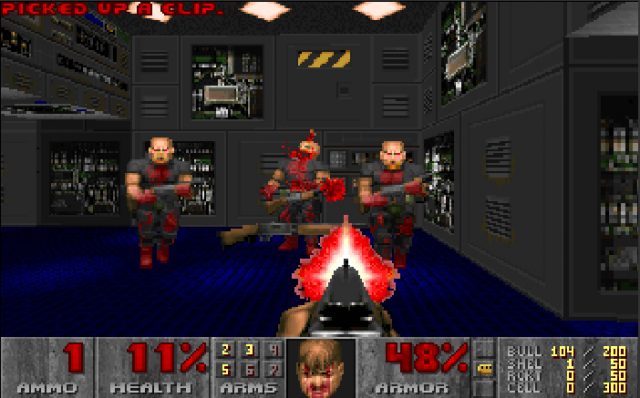