a.k.a. Heretic: Shadow of the Serpent Riders / Mage

Raven Software teamed up with Id Software for the second time in its creation of the hit fantasy action game Heretic. Based on a modified DooM engine, Heretic pioneered a revolutionary new inventory system for character item use that has become commonplace in the FPS genre. Id Software published the game under its flag and it was distributed by GT Interactive.

Players took the role of Corvus, an Elven hero whose race was nearly eliminated by a horde of evil monsters from another dimension. The first episode of Heretic was released as Shareware as a precursor to the full version of the game, Heretic: Shadow of the Serpent Riders.

Heretic won several awards for excellence, appeared in such notable publications as USA Today and Playboy, and opened many new doors in the computer gaming software industry for Raven Software and its team of developers. Heretic was Raven Software's most popular, highest acclaimed, biggest selling game to that point.

Sanguine # 2009-01-13 22:47:04
A Doom-like game with similar premise, demons from some outer realm invade the homeworld of Corvus, our elven hero and "heretic" for standing up against the absolute rule of D'sparil after years of hiding. As the lone magical warrior to stand against the hordes of the Serpent Rider, you battle your way through monsters, undead, demons and the evil disciples to finally give D'sparil a final beating. Basically Heretic is for anyone who wanted fantasy-themed Doom as it doesn't really offer much more than Doom did, though Heretic started a well-loved series telling the tales of D'sparil's brothers enslaving other worlds and how their indiviual heroes fought back and defeated the rest of the Serpent Riders. However, if you're just looking for a plain shooter of around the same era, you're better off with Doom.

Sanguine # 2008-12-14 17:38:07
More than just another Doom clone, Heretic lets you battle it out as Corvus against the first of the serpent riders. New weapons, the ability to jump and fly, water that moves your char around etc. make this game stand apart from others of it's kind. Along with an inventory system, and the Tomb of Power, which gives all your weapons an added boost, perfect for when you're opponents are just a little better equiped than you.

Heretics game-engine is the same as in "Doom" and "Doom 2". Gameplay is very similar with some extra-features and a fantasy-setting. In 1996 GT Interactive re-released the game as "Heretic: Shadow of the Serpent Riders", which features 2 more episodes. 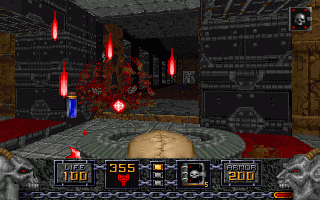