a.k.a. Hexen: Beyond Heretic

Raven Software's HeXen actually began development as an expansion for Heretic that was originally slated to hit the shelves as "Heretic II." However, the game design so expanded beyond the original game that this proposed the expansion of the Heretic universe took on a bold new identity of its own...HeXen: Beyond Heretic.

HeXen was developed over a period of 8 months, published by Id Software and distributed by GT Interactive in 1995. The game introduced the 3-D gaming world to the "hub system" of level progression, rotating polygonal brushes and multiple character classes that were available in both single player and multiplayer. All of this combined to help HeXen raise the bar for the first-person shooter genre. HeXen pushed Id Software's DooM engine to its absolute limits and surpassed Heretic as Raven Software's most popular, highly acclaimed title.

The success of HeXen prompted a mission pack, Deathkings of the Dark Citadel, and several ports to home console gaming systems including the Sega Saturn, Nintendo 64 and the Sony PlayStation. HeXen also became the first Raven Software game made available for the Macintosh.

Raven - # 2007-11-11 23:37:12 - official description - source
~ Represeting a quantum leap in realism, bursting at the seams with playability and bulging interactivity, Hexen is a spellbinding and terrifying epic that pits its players as one of the three classes of hero and sets them on a nightmarish knife-edge quest to destroy the evil rulers who once controlled them. Every part of this colossal battle between horrific creatures is waged with one of the 12 death dealing weapons, either alone or in 'co-operative' or 'Deathmatch' networked play. Pretenders to the throne beware: - id Software and Raven have joined forces again to create this masterpiece of the 3D dynasty.

Box blurb - # 2007-07-30 18:34:24 - official description - 1 reply
While you were battling the evil forces of D'Sparil, the other Serpent Riders were busy sowing the seeds of destruction in other dimensions. One such dimension is the decaying world where Hexen takes place. A world littered with the mangled corpses of nonbelievers and inhabited by the undead followers that executed them. Only three humans - a warrior, a mage and a cleric - have escaped the leaders' vicious spell. Now these brave souls have sworn to crush the evil regime that threatens to destroy the world forever. Separated upon entering the mystical portal, the three are forced to attempt on their own what they had hoped to do together: find Korax's stronghold, destroy him and restore order in the physical world.

Has rather unique difficulty levels, the number of enemies gets inflated as is to be expected, but better weapons are located later on, forcing you to fight with old and "less efficient" ones much longer. But since each character has only 4 weapons total, including the starting weapon, this isn't such a big thing but does prove additional challenge early on. There are some differences in encountered enemies between the characters, too (or they're randomized, but I haven't verified that). There are only two types of "ammo" (mana, really), where the second weapon consumes blue, third weapon green, and fourth weapon both. Unlike some other games of the time, magic was not simply dispensed from some magical weapons, but the character actually seemed to have proficiency in magical arts, as witnessed by the mage classes use of lightning and ice and cleric's use of fire. Hexen is also one of the first (if not the first) first-person games to implement jumping, as well as falling damage which is ignored in great many games even today.

Sanguine # 2009-01-13 21:35:01
A sort of sequel of Heretic, Hexen takes you to a new world to take the place of one of three heroes (A Fighter, a Cleric and a Mage) to stop the second of the Serpent Riders. The use of a "hub" system to travel back and forth through the levels is a very innovative idea. This is one of my all time favorite games, however some are turned away by the running around, collecting of puzzle pieces.

has this MOD
Anvil of Thyrion (Linux) 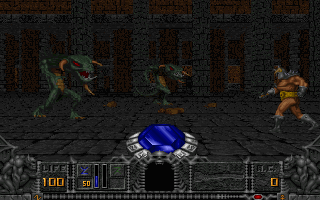