A paragon of the beat'em up genre in every sense of the word.

Sums a very intrincate and really well crafted story, some "choose your own path" dialogue options, inventory management, and an incredible and engaging gameplay in one game.

The sequel to Tower of Doom, Shadow over Mystara was exactly the same, Except better. There were now six playable characters, a cleric, an elven fighter/mage, a mage, a thief, a human fighter and a dwarven fighter (more damage but slower). In addition to the extra characters each of them has 2 alternate sets of graphics so two people could play the same character but look completely different, in fact the alternate characters even had different sounds and spells.
The aim of the game was to kill the dragon Synn and along the way was the usual collection of enemies and nasty bosses. The game had branching paths at certain points and a cool bit where you got to drive a boat. Items were expanded on from the original, more equipment, boots of speed, a displacer cloak and many more. There were also more weapons including magic and cursed swords and more items, money could be transferred between characters in shops and the cleric could heal other players.
Control stayed the same as in Tower of doom with a few refinements. To the best of my knowledge this was the most complex of the 'run around and hit things' games, it was also the last in 2-D (gauntlet legends being the only other I can think of)

Has two different arcade versions, one for 1-2 players (you can see the inventory of each one) and another for 1-4 players. 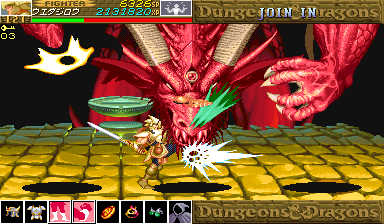