Considered by many to be the best of the Castlevania series (Dracula X in Japan), rivaled only by the PSX's Symphony of the Night. Unfortunately, this game was never released outside of Japan. The game was ported to the U.S. on the Super NES, but general consensus holds the port to be abysmal. Rondo of Blood is a CD based game and features anime-style cutscenes and a high-quality soundtrack.

was remade as
Castlevania: The Dracula X Chronicles (PSP) 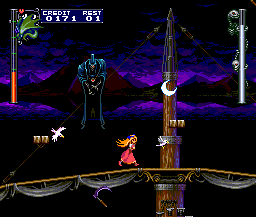