This GAME OF THE YEAR EDITION of the smash hit Deus Ex features an all-new multiplayer mode and a new head-to-head deathmatch mode. Also included is a software development kit, so you'll be able to create both single and multiplayer missions from scratch, as well as modify existing ones.

The year is 2052 and the world is a dangerous and chaotic place. Terrorists operate openly - killing thousands; drugs, disease and pollution kill even more. The world's economies are close to collapse and the gap between the insanely wealthy and the desperately poor grows ever wider. Worst of all, an ages old conspiracy bent on world domination has decided that the time is right to emerge from the shadows and take control. No one believes they exist. No one but you.

* Real role-playing from an immersive 3D, first-person perspective. The game includes action, character interaction and problem solving.
* Realistic, recognizable locations. Many of the locations are built from actual blueprints of real places set in a near future scenario.
* A game filled with people rather than monsters. This creates empathy with the game characters and enhances the realism of the game world.
* Rich character development systems: Skills, augmentations, weapon and item selections and multiple solutions to problems ensure that no two players will end the game with similar characters.
* Multiple solutions to problems and character development choices ensure a varied game experience. Talk, fight or use skills to get past obstacles as the game adapts itself to your style of play.
* Strong storyline: Built on "real" conspiracy theories, current events and expected advancements in technology. If it's in the game, someone, somewhere believes it.

If there's a thing that doesn't make sense, then it's the early sound cutoff bug this game has on my system. After trying solutions that work in every other game, I found on a forum that switching to sw rendering and back to D3D fixes it temporarily, and it did, even OpenGL rendering didn't have it. But both of those had some other issues I didn't want so I kept looking. Until I switched off vsync, and behold, sound clipping is gone. Fine and dandy with me, except it doesn't make slightest bit of sense. Video card setting that releases the framerate synchronization with screen refresh and allows the game to render more frames somehow allows the game to play the voice overs to the end. Other people have had similar issues with the game and all with different solutions, but those other solutions actually made sense.

The 1.014f patch is the last that affected single-player. 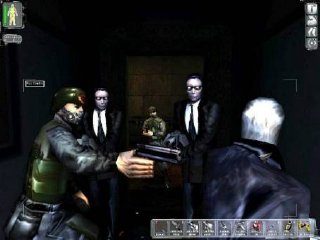