When thinking about Nintendo games, adventure games are not the first genre that come to my mind. But it seems Nintendo has done some of them. "Famicom Mukashi Banashi: Shin Onigashima" is a traditional console adventure game with the normal menu driven system. However it is also very different because it oozes traditional Japanese writing style with text displayed on "scrolls" and read from left to right. Despite a lack of translation available I enjoyed it with a solution at hand, although it is nothing that would let me say "Wow!". The Famicom Disk System just isn't a strong enough system to impress with graphics in adventure games (homecomputers were better in that regard). It is also irritating, that this game represents only the first half of the whole game. In order to continue with the game you had to buy the second part named "Famicom Mukashi Banashi: Shin Onigashima - Kouhen" which was released a few weeks later. 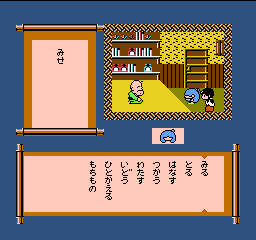