The one that started it all! I was just a boy when my father threw himself under the tracks of an oncoming train on the Yamanote Line in Tokyo. He had been the president of a powerful trading company, but had been under siege by an enemy in a power struggle that I didn't understand at the time. With my father gone, it fell upon my mother to lead the family and try to pay off Father's debts. She wasn't up to the task, and was buried next to my father less than a year later. My older brother Eiichi and I were separated, then, passed around the family like unwanted guests. We had lost everything.

Last summer Eiichi appeared again on my doorstep. He had prospered in the years since I'd seen him, and had built a successful trading company. "Koichi," he said to me, "I found out who was responsible for our father's death: the current head of father's old company, Shoji Okamura."

When he asked me, "Will you help me avenge mother and father?" I agreed immediately.

So I became his hatchet man. My job was to approach the Okamura family, especially the three Okamura sisters -- sexy, grown-up Yuki, short-tempered but sensitive Emi and the innocent Risa -- and gather information on the Okamuras for my brother. After six months, I had gotten to where I was eating dinner at their house regularly. This allowed me to bug Shoji's office take documents out of his trash, and copy files off his computer. I reported everything to my brother faithfully.

I was never sure if the information I was providing was doing any good, but gradually, it became apparent that Shoji Okamura's business was failing. He grew more and more desperate, and one day he disappeared completely. The happiness of the Okamura family, who had taken so much from us, had been stolen piece by piece. My brother swore he wouldn't stop until Shoji Okamura was driven to the point of taking his own life, even if it meant pushing the Three Sisters into lives of prostitution and worse.

The only problem is, I had fallen in love with those same three sisters... 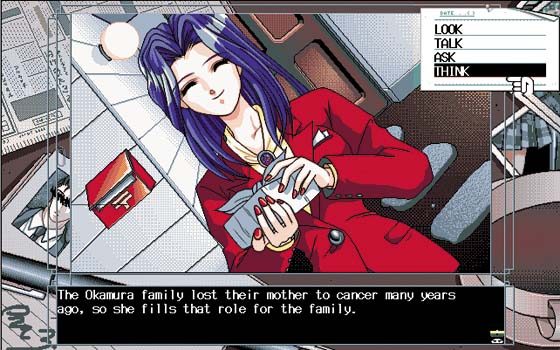 View the full gallery (4 are NSFW)