CX-5257. Rarity 4 scarce+. North America NTSC. 1 player or 2 players alternating.
Herd the Mogwai into cages to keep them out of water and from eating. Sounds simple, but the Mogwai really like fiddling with your dad's malfunctioning inventions that tend to fling food or water. Water from a variety of household sources, including leaks and ice thrown around by the Mogwai, will cause the Mogwai to multiply fast enough to embarrass rabbits. Food is everywhere too and the Mogwai toss it around also. When they eat, they turn into gremlins. Gremlins cannot be herded and must be killed. Attract both by turning on the TV. Temporarily stun both using a camera with disposable flash cubes.
Gremlins was actually ready for release in 1984 but delayed as part of Jack Tramiel's takeover of Atari. 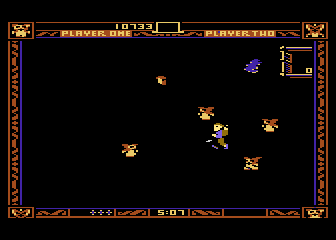