Pilot your Solvalou in battle against 16 different types of Xevion enemies. Arial targets can be destroyed with your laser blaster. Ground targets with your photon bombs. Those crosshairs in fort of you are your photon targeting computer. They light up even if they cross an invisible ground target.
Toroid Fleet Ships will glide in from the side, fire, then retreat. Their slow
Torkan Scout Ships like the Toroid but faster and comes from multiple angles from the top of the screen
Zoshi Death Squads move erratically and you don't want them behind you.
Terazzi Deflector like the Torkan, but fires multiple shots.
Giddo Spario (Energy Blast) will make kamikaze attacks against you.
Mirrors (Bacura Shields) are indestructible kamikaze attackers.
Zakato Energy Launcher (Black Ball/8-balls) are teleported close to your ship by Andor Genesis just before he attacks. They explode as they fire their only shot at close range.
Andor Genesis pilots is the mothership ship. Armored and armed with four laser cannons. The only way to defeat Andor Genesis is with a direct hit on his ships rector core with a photon bomb (A small thermal exhaust port, right below the main port). Getting close enough to hit that spot is very dangerous. After striking the reactor core, Andor Genesis will retreat for repairs and will return with more 8-balls.
Grobda Tanks are smart, but harmless. They play dead on the ground until fired upon. Then they zip around out of range.
Logram Sphere Station are common, small, purplish ground structures. They will fire a quick bolt at you.
Boza Logram Dome Network are cross shaped ground structures, containing four Sphere Stations around the core. Shoot the core for maximum efficiency and points.
Derota Defense ground Stations fire a continuous stream of ammo. Shoot the core for maximum efficiency and points.
Garu Derota Mega Station work like the Derota Defense Stations but shoot double speed.
Barra Energy Station provide ground-based power for the Xevion assault fleet. They are defenseless and mostly harmless.
Zolbak Detector Domes are ground structures that are defenseless and mostly harmless.
Sol Citadels are hidden on the ground and can only be detected by your targeting computer. One bomb to wake it, another to destroy it. 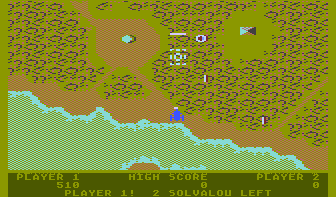