A dating sim for the 8-bit Nintendo? From Nintendo themselves? You sure couldn't expect that. But there it is. You play a boy new at school meeting a girl which is - as he finds out - a young pop idol and your task is to befriend her. Not sure if it is the first "get the girl at school" game, but on consoles it is and already has the setting and typical characters of many more such games to come. Of course there are no adult scenes in it, though there is at least a little scene where you can "spy" on girls dressing being in their underwear, which is also very unexpected from Nintendo. Another fun fact is that during the game you obtained phone numbers which were real existing numbers and you could call them to get hints and further information. Well without understand a lot Japanese this one is of course hard to tell whether the gameplay is good or not. WIth a walkthrough it was easy but doesn't make the story more understandable. Graphics are average. Famicom adventure game graphics are mostly not really that great and I think many screens were not very detailed looking. 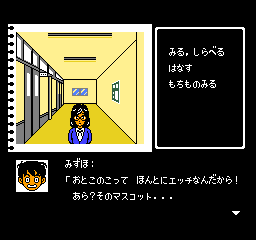