In "Kick Challenger - Air Foot" you control one of the most weird protagonists I have ever encountered in a videogame. A tomato on huge feet, which controls very strangely. At least you can use your feet to kick and kill the numerous insect-type enemies. In each upward-scrolling level you have to find your way to the end of the level facing an end boss. Later levels are a bit complicated in layout due to many teleporters not obviously destructible walls, which annoyed me quite a lot. So in the end this game is more weird than anything else. Surely not a "good" game mostly due to the unorthodox control scheme. 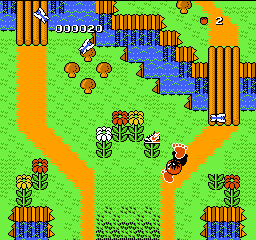