Using a turn-based combat system; the player controls giant fighting robots called "wanzers" in order to fulfill mission objectives or to defeat foes in mechanical warafre. Robots can be continually upgraded by purchasing or scavenging new weapons/armor/computers/ect. This game takes a new approach to increasing the depth of the game creating the Double Feature Scenario which allows the player to choose one of two completely different character viewpoint within the same general plot of the game.

# 2013-10-03 16:56:08 - official description
It is the year 2112, ten years after Front Mission Second. Kazuki Takemura, a student and test pilot for Kirishima Industries and his friend Ryogo Kusama are delivering Wanzers, giant battle machines, to a military base when a mysterious incident leads both characters into an unexpected turn of events. The incident at the JDF base has now drawn both Kazuki and Ryogo into a global conspiracy.
Front Mission 3 features turn-based combat in a massive strategic adventure with 2 different scenarios and over 150 hours of gameplay. Take control of giant battle machines, upgrading them with better components, weapons, and computers. Search for clues through in-game 'internet' and 'e-mail' systems while plotting your moves on detailed, fully 3D environment maps.

IN FM3, battles are fought using Wanzers, which are quite realistic combat robots [unlike Gundams, etc].
This is a strategy RPG set mainly around the Asia/Pacific rim in the near future. There are 2 unique seperate storylines stemming from a single decision. 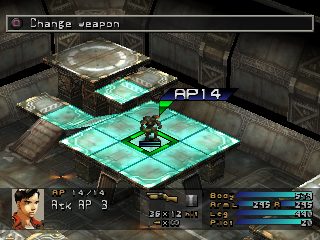