One of the first "Post-Apocalyptic" RPGs, this game set new standards for character interaction and depth. Featuring some great writing, and NPCs that not only had personality, but occasionally refused to follow orders or do things that would not benefit them.

Wasteland was programmed by Interplay Productions and distributed by Electronic Arts for the Apple ][ in 1987. According to Interplay programmers, the game shipped on January 27, A.D. 1987 or thereabouts. Later, Wasteland was ported to the Commodore 64 platform. Alan Pavlish wrote the
game. 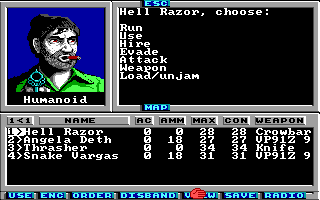