Skull Cracker can be considered the spiritual successor to the 1991 title Creepy Castle that Bill Appleton wrote for Reactor Inc. The game is set in an alternate world where it is normal to see zombies and monsters roam the streets. They are kept under control by MEI (Mortality Enforcement, Inc.) - an organization that "helps the dead stay dead". As the monsters grow in number however, they organize themselves and demand civil rights. Since they are a common sight and fairly harmless, people do not worry about them, but a mysterious substance known as Goop changes the monsters' character drastically.

MEI brings in the freelancers Mortis "The Skullcracker" Rigor and Penelope "Bonebreaker" Jones to bring back order. Players can choose between one of the two characters, each with a distinct fighting style. With side-scrolling brawling gameplay, they need to travel through four main locations of four levels each. Some of the places visited are a shopping mall, an arcade, the graveyard, a playground, the MEI headquarters, and more. Next to moving, jumping, and climbing, they can punch and kick opponents, and use power-ups such as flare guns, flame throwers or supersoakers filled with holy water to take out enemies, while replenishing health with pick-ups. 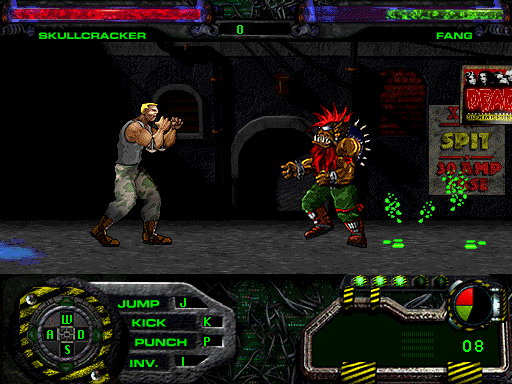