This is a remake of the original Legend of Zelda. The graphic overhaul is immediately apparent but there are a few other subtle changes. Most changes make the game not necessarily easier, just a bit less frustrating. Save or Continue, and Link's hearts remain unchanged or filled to three if they were below that. Boss fireballs not deflectable and Stone Statue fireballs deflectable looked identical in the original, now players can see the difference. Dungeon rooms are rarely so square as they were. Blocks are often replaced by walls where appropriate. And rooms that used to be a pattern of blocks are not a more organically shaped area with various obstacles to maneuver around. The new room shapes and smoothed out terrain means there are less places that look like bombable walls, so bombable walls are easier to find. Most notable it the changes in dungeon layout, where are not so much changing the rooms as it is replacing the room-to-room tunnels with a simple stairway (instant arrival at the other end). New pathways have been added. And dead ends and pointless treks into obscure corners of the dungeons are virtually eliminated by adding something useful or even necessary to them. A good example of this is in the first dungeon. In the original, Link can go left and get a key by defeating enemies. Or, Link can go right and get a key by defeating enemies. Or, both, if the player choses not to or does not knows where bomb to avoid using keys. In this remake, Link can only go left. When enemies are defeated, the staircase must be opened and this leads to the right room where the enemies must be defeated to open the exit back to the entry room. Another trick is make dead-end paths useful by having pots in the rooms. This way, players can now grind for hearts and money on a path that was just a waste of time in the original. Also there's more completely optional secrets to discover. Certain room based puzzles in the dungeons have completely new solutions. Player will find themselves using items in ways they are used in other Zelda games and in unique ways. These are usually easy and nearly intuitive. Along the lines of encountering something new in a room in a dungeon on the way to the boss; using the item collected in the same dungeon in a on the new thing to solve the puzzle. These are not just an added step, these teach the player. These new tricks learned in the dungeon can be used elsewhere to find a whole new set of secrets that have been added to the game. Also, use old tricks in new places to find the some of new secrets. This aptly named 1st quest is but only the 1st, no 2nd quest follows on defeating Ganon (to the best of my knowledge). 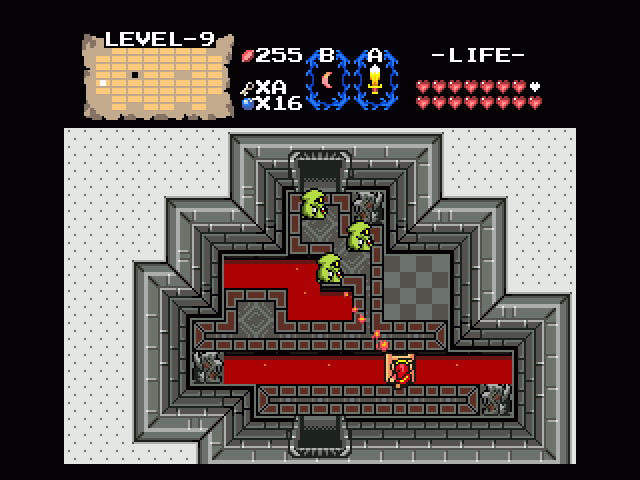