"50 Mission Crush" was the name given to the crushed service cap worn by the battle-hardened veteran pilots of the B-17. It was a mark of distinction and honor.
It is now the name of this exciting and unique role-playing wargame. 50 Mission Crush puts you in the cockpit as pilot of the most glamorous bomber of World War II - B-17 Flying Fortress.
As part of the 8th Air Force 306 Bomber Group, you must try to survive fifty harrowing raids over France and Germany. Everything about this game is historically accurate, right down to the name of your bomber: "Impatient Virgin". The action is also real... fast and intense!
Like a real B-17 commander, you'll have full control of your bomber and your gunners. You'll determine the bomb/fuel ratio your plane will carry on each mission, and how you'll fly (high or low altitude).
After each mission (if you've survived!), you'll be evaluated by the computer and awarded points based on such factors as: How dificult was the mission? How accurate was your bombing? How many enemy planes did you shoot down (Don't forget enemy fighters get better at shooting down B-17's as time goes by!)?
The more points you get, the closer you'll be to a promotion. Starting off as a Lieutenant, you'll be able to make it all the way to Brigadier General!
But for all its luster, the General's bright shiny star will pale to a mere battered cap - your 50 mission crush. 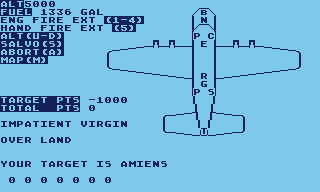