Now you can change the course of history with GENGHIS KHAN II: Clan of the Gray Wolf. With a powerful stronghold in Asia, your sights are set on taking over the whole continent ... and maybe even the entire world! You can play as Genghis Khan, King John, Philip II, or 12 other gallant leaders as you engage in a battle for world domination. Recruit troops, deploy them in strategic locations, and get ready for battles of epic proportions as you lead your army to victory against other clans. There are 16 different units to choose from, including knights, samurai, and even elephants, so assemble your army carefully, taking the terrain and type of battles into consideration. If you think you're ready to rule the world, then get your hands and GENGHIS KHAN II: Clan of the Gray Wolf, and prove it!

You are Genghis Khan only you have a destiny to conquer the known world. Will you succede or fail only time and your skill will tell. This is a war simulation game. 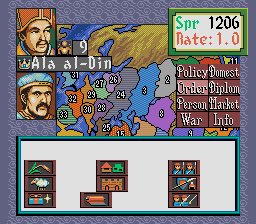