You are Kirt, last survivor of a noble race of shape-shifters. The furious pace never falters as you fly, swim and run through indoor and outdoor environments including dungeons, caverns, castles, mines, volcanoes and aquatic caves. You alter shape at will, with each of six forms unleashing new powers and revealing new vulnerabilities in your quest to find and destroy the murderer of your people.

from another world - actually native, but you spent your youth on Earth, and now you've returned, to kick ass and chew some tree sap.
unique protagonist - last member of a species of shapeshifters from another world.

Sanguine # 2009-03-28 17:15:32
The project was started in 1992 and used an engine by Carmack that predates the old Doom engine. Unlike Doom, ShadowCaster had jumping and other movement options available and several role-play features, making it perhaps one of the most advanced 3D game engines out there at the time.

In Shadow Caster you have the ultimate power - morph at will into six shapes to aid in your quest against evil. Fly, swim and run through caverns, castles, mines and underwater caves - relentless combat awaits you at every turn. Features the most outstanding 3D art ever seen in any point-of-view game. 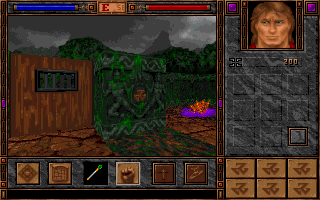