Came with six 3.5' disks. The original release included a demo of Ultima Underworld on a 5.25' disk. U7 was rerealsed both by Origin and Electronic Arts in many packages that included the sequels/add-ins for U7 (Forge of Virtue, Serpent Isle, The Silver Seed)

Tags:
The 7th canonical game in the Ultima series and the first game in Ultima's Age of Armageddon. The player and party can use crossbows and bows. Ingredients can be mixed to bake bread and other things. Cheese is available as food. A variety of items can be crafted into other items. There are pumpkin fields in the game, from which pumpkins can be harvested. Flight of the Bumblebee is played at one point, Rule Britannia is overplayed. There are several prisoners in the game and its this plays into the plot more than once. An addictive medicine in the game is abused by characters and can be abused by the player's character and party, with consequences. Unicorns are mentioned in in-game books and by characters
one can be found by the player also.

(Zerothis) - # 2008-08-24 01:48:08
Still one of the best RPG's ever made IMO. The Forge of Virtue was a small expansion released with some packages. Ever wondered how to get this baby to run on Windows? Check here:
exult.sourceforge.net 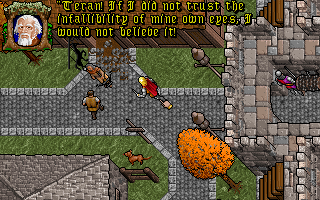