Outlaw Mad Dog McCree and his henchmen have taken over a Wild West frontier town! They've locked the sheriff in his own jail and are wrecking havoc in the saloon, the bank and the stable. The player is addressed as "Stranger" by the characters in the game, After a warm-up session of target shooting, the player sets about cleaning up the town. As townspeople are rescued, they give clues to reveal the whereabouts of Mad Dog's hideout. With sharp shooting, the player can eventually have a final showdown against Mad Dog McCree himself. Bonus rounds are awarded for shooting cow skulls and spittoons that appear intermittently in various scenes - it's a blast! 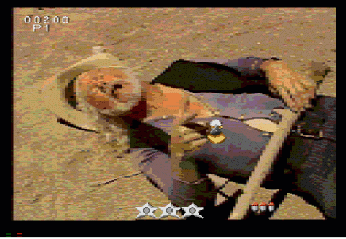