This is an American Football Sports Strategy/Simulation game for the ZX Spectrum and C64, which can be played for season after season as the Head Coach attempts to build the best possible squad, plays each ten game regular-season (calling the plays as the game is played) and if successful takes part in playoffs with the aim of getting to the Super Bowl.
The 'College draft' at the end of the season is a favourite feature. Although the graphics were fairly simple Head Coach was certainly addictive and the gameplay challenging.
Written by Simon Davies of Wirral (near Liverpool), England in 1986 and published by Addictive Software of Bournemouth who had had a previous hit with Football Manager. Head Coach reached No 3 in the UK charts in September 1986, coinciding with the popularity of American Football in Europe.
The author had gained a knowledge of the game by helping to run a British American Football team called the Wirral Wolves along with real-life 'Head Coach' Chicago Police Sergeant George Aguado who died earlier this year.
The game has no relation to another 'Head Coach' later released by players software. 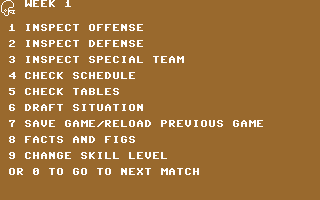