Worlds of Ultima: The Savage Empire

A two-fisted adventure in the time-lost land of Eodon, where dinosaurs still rule and ancient mysteries abound. Only keen wits, nerves of steel an a good hunting rifle can make the difference between conquering the Savage Empire and becoming a Tyrannosaur's next lunch. Prepare yourself for cliffhanging excitement!

Another great Ultima Role-Playing experience!
- Uses the most advanced Ultima role-playing system ever created.
- Dozens of interesting characters with unique personalities and sophisticated conversations.
- Easy-to-use point-and-click interface.
- A fully interactive world simulation with thousands of objects. If you can touch it, you can use it! 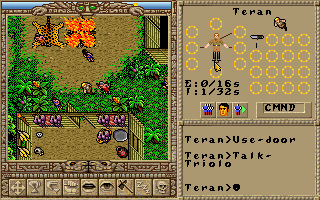