Overlord simulates the Allied invasion of Normandy on 6th June 1944. The game covers the period from the initial invasion to the destrucion of the German army in France.
Game Features: You command the British, American and Canadian armies by a system of 6 cursors which enables you to set up a line of advance for each army. The German armies are commanded by a very sophisticated and complex computer opponent. Large scrolling map on varried terrain - 5 screens in size. The game also includes hidden movement, supply, unit details and 3 levels of difficulty. For 1 player. 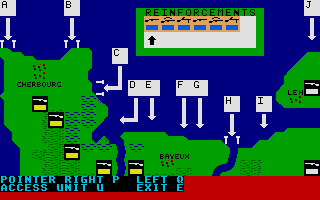