The full story of the Spanish Armada is a fascinating piece of history. Starting as a great adventure it ended as a human tragedy on a massive scale. This simulation attempts to capture five days of the Armada's journey, the five days it took for the huge fleet to make its way from south of Plymouth to the Isle of Wight. The Armada was a very real invasion threat to England, but the clash of politics, religion, intrigue and misunderstanding was also very real. The Battle of The Armada offers you the chance to take the helm as Lord Howard, defending the English coastline against the attacking Spaniards, or even rewrite history by leading the invasion fleet against the likes of Howard, Drake, and Frobisher.

This game was re-released -together with "Gettysburg"- in the "Turning Points" Compilation (1994, CCS Ltd. & On-Line Entertainment).
Interestingly the Atari-ST version of this Compilation does not include the game "Waterloo" - the MS-DOS Compilation did! 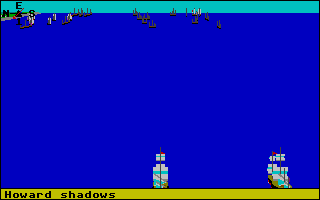