A feud between the kingdom's heirs, a battle won by magic and a massacre that stained the battlements of Castle Wulf red with blood. The Necromancer now awaits his next victim deep within the castle walls.
No valiant knight or swarthy soldier but a liar, a mercenary and a thief. Karadoc the dwarf is destined to go where men have failed, to come face to face with the Necromancer and probe the darkest mystery known to man. His motive? Not honour or love but treasure! and Castle Wulf is bursting at the seams with it...
Cadaver is the interactive fantasy adventure you've been waiting for. Stumble through a labyrinth of age-old passageways, explore the mystic contents of Wulf's secret rooms, battle to the death with hideous monsters, grapple with supernatural traps and puzzle over the enigmatic spells of Necromancy.

- A complex interactive game environment with hundreds of different rooms and locations
- Mind-bending puzzles
- A wide variety of available weapons
- An array of spells and mysterious magic potions
- A vast menagerie of monsters, including mutated rats, man-size water lizards and gigantic fire-breathing dragons 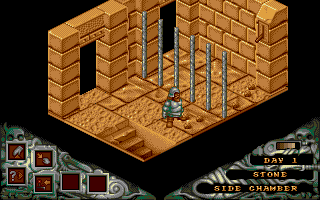