A few defiant humans are trying to reclaim the war torn city of Phlan from bands of monsters. They plan to build a new city on the ruins of the old. It seems as though the monsters are organized under someone's command to prevent the rebuilding. The player commands a group of hired adventures to clear monsters from the city, from the city's surrounding defenses, and to investigate the source of the attacks.

The Mac version was designed to operate on monochrome Macs as well as color Macs. 16 color display required 2 Mb and/or a Mac II. The game is fully integrated into the GUI with all the screen elements appearing as separate windows and dialogs rather than being tiled and multiple screens as in all other versions of the game. Game options are all available in the Mac menus and have keyboard shortcuts. This allows more space for certain elements, for instance the text area is approximately 80 columns by 9 rows. The text ares is much larger than in other versions but few dialogs actually use more than 3 lines of it. Also, the 1st person view and some other elements are the same size as the other versions. The Mac version has sound but lacks the music that all other versions have.

The Apple and Commodore versions were simultaneously developed according to the article "Advanced Dungeons & Dragons" by Croftward in "G.M. the Independent Fantasy Roleplaying Magazine", September 1988. Other versions originate from ports of one of these. 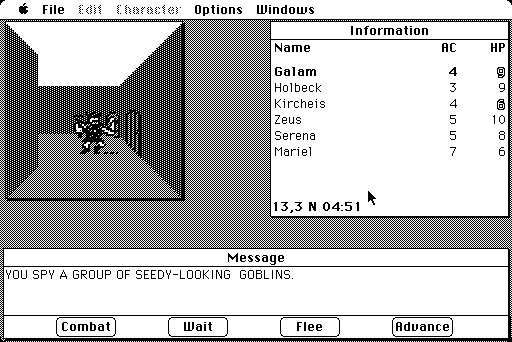