The player is a captain and commands a crew. They deliver people and supplies from planet to planet, guard shipping lanes, and fight pirates via mission based gameplay. In addition to this open ended gameplay, the player can earn reputation points to gain access to plot advancing scenes and missions. A bit different for the Gold Box games, is a 3D view used during real-time combat and space flight. Ships are armed with catapults and ballistas. Crews can also board each other's ships for turn based combat that's familiar to Gold Box. During turn based combat, The player has full control of the officers but multitudes of crew are commanded actually operated by the game's AI under the captain's orders. Explorations are limited to the local crystal sphere.

Test of navigator skills: Ships have warning system to prevent the navigator from plotting a course into a crystal sphere that complete surrounds the local system. A good navigator can do it anyway, resulting in destruction of the ship and death of everyone on board.
Ultimate test of navigator skills: The warning is extra vigilant about collisions with a sun. The best navigators can successfully plot and carry out this fiery death.

The physics of spelljamming allow for some unique tactics. A spelljammer equipped object carries a surrounding air bubble. If a ship's bubble is dangerously stale or thin, it can pass close to another ship and their air bubbles will mingle. Note that stale air tends to sink to the bottom of the bubble, a carefully planned pass can raise the air quality of one ship while simultaneously poisoning the air of the other one.

Al Escudero had been assigned the project of doing a space battler for SSI. Escudero designed the '3D extensions' for the Gold Box Engine which was basically just draw a different still map for each frame, populating it with sprites, and individually scaling everything based on viewing angle and distance. After a couple of months, upper management at SSI decided to kill the project. But, another 2 months would go by before the message worked its way from upper management through all the in between management levels and finally got to Escudero. Not wanting to waste the time and effort, management decided they could make use of one of the obscure D&D licenses in their inventory, SpellJammer. Most graphics in the game are digitized photos since everything had to be viewable from many different angles (too much to hand draw or code). A color digitizing system was too expensive so the photos were taken in black & white with RGB filters then the three images were combined in the graphics editor (this produced better images than most color systems anyway) The video, photo's and hand drawing art were digitized on an Amiga, then edited on a PC, (then transfered back to an Amiga for the Amiga version.) Models were custom built for one ship. The custom model approach was abandoned when it was determined that the eventual cost would be more than the game's expected profit. People from the Society for Creative Anachronism posed in their own costumes. The other human models were friends of Escudero. Many objects were gathered from quick and easy sources, such as asteroids from Escudero's back yard. All the graphic primitives which were written in x86 assembler, everything else was done in C. The videos are a series of compressed pictures that are decompressed with an assembly routine. Mark McGough and Peter Grisdale were computer programmers and had all the equipment to do the music. They worked in exchange for being listed in the credits and a copy of the finished game. Escudero programmed most of the game in his kitchen. But he rented a small office to impress SSI when they came to visit. (He would eventually rent the whole floor of that building and run a successful MUD that was eventually swallowed by the gaping maw of the abyss known as Electronic Arts). The final product shipped with a bug (stemming from a standard C library, not Cybertech's code) that apparently only triggered on SSI's PC computers (not other PCs or Amigas). Most later units don't have the bug. 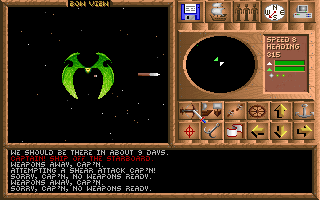 Not so close, they may have space herpes!