The game starts in the year 2127 at the end of the great galactic war. The universe is now divided into the 12 known civilisations that took part in the conflict. You play the hero who can be selected from any of the 12 different races. Your government has called you out of retirement to combat the chaos caused by the spreading of the civilisations over several planets. Your task is to travel to these planets and establish a foot hold. This is done by setting up an isolating net until your government can send reinforcements to capture the planet. Beware though, for the galaxy is teeming with pirates and bloodthirsty aliens who shoot on sight! Furthermore, you have made many enemies amongst the other eleven races involved in the great war and they will try to hinder you as much as they can. There are two main elements in the gam; combat in space and combat on the earth. In space, you will need to render the enemies' spaceships harmless and gain bonus points by boarding them, whilst the earth combat involves wiping the aliens from the surface of the planet in order to set up the isolating net and secure the planet until the back-up troops arive. 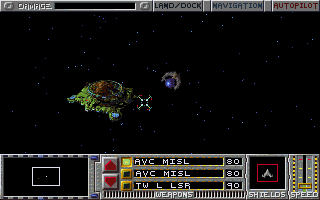