Shining Force Gaiden: The Final Conflict is the third in the Game Gear's Shining Force Gaiden series, and (I assume) the stunning conclusion to the trilogy. The second game came out in English as [[gameid:43867 Shining Force: The Sword of Hajya]], and the first two actually had English releases as a Sega CD remake called [[gameid:33172 Shining Force CD]]. Until 2005, however, this final chapter was Japanese-only.

So how is it? Well, like the previous Game Gear titles, it's a series of fantasy strategy battles set to a plot in the Shining Force universe. Unlike the Genesis titles, there are no town-exploration scenes, so you spend most of your time just fighting battles or watching cutscenes. If you haven't played the first two, be warned that you may feel like you're being thrown into the middle of a story without any idea who anyone is, or at least I did. This seems to be more the fault of the game than the translation, though.

The gameplay itself seems like the usual solid Shining Force tactical fantasy combat, with your archers and centaurs and robots and mages. So don't delay, finish the saga now!

There is an unofficial English translation available here:
[[link:http://www.shiningforcecentral.com/]] 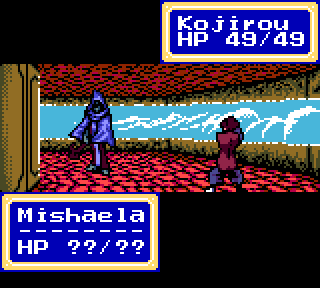