published by Studio 3DO in 1995, developed by 3DO, running on 3DO Interactive Multiplayer
type: shooter
perspective: 3rd person
player options: single player
3.8/5

Captain Quazar is not just your average shooter, (oh no!) but is also a very HILARIOUS adventure by gaming giant 3DO!
Check this: He'll supply the FIREPOWER... YOU supply the BRAINS! Captain Quazar is a superhero with his sights fixed on the cosmic criminal elements who are intergalactic drug dealers, terrorists, and your run-of-the-mill thugs. As Captain Quazar, you've got to shoot some serious black holes into their demented plans! You'll battle the bad guys with weapons that are um... unconventional. Yes, you CAN actually fry your enemies in this game complete with INCLUDED RECIPES! During your investigations, you'll also get to interrogate the (often butt-ugly) enemy in order to get him to spill secrets that can even unlock SECRET LEVELS? So then! Are you up to it? I think you are!
Captain Quazar definitely has all the elements of a RED HOT BUY, and here's even a few more... 400 screens on each HUGE LEVEL, over 500 hidden power-ups, even simultaneous 2 player action is supported. As an added bonus, you even get the free shareware version of Game Guru cheat utility! We won't give you any free superhero tights (your legs are too hairy anyway) but as you can see, Captain Quazar is worth your hard-earned dough. Go for it, Bud. 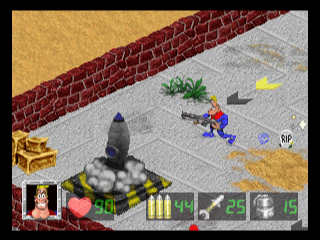