It is now the dawn of a new age. The most momentous of wars has begun in the heart of the Sacred Lands. Four races - the Empire, the Mountain Clans, the Undead Hordes and the Legions of the Damned - stand ready for battle as they fight for the survival and dominance of their war-torn world, and the gods they have long believed in.

The Mighty Lords watch silently as their Disciples prepare for the daunting tasks ahead. Each warrior must engage in a struggle of swordplay, sorcery, and uncommon courage in order to complete their sacred quests.

The Empire fight to secure their people's future; The Mountain Clans search to regain their rune knowledge; The Undead Hordes seek revenge for their accursed god; and The Legions of the Damned battle to resurrect their fallen angel's soul. It is a struggle of desperation.

Every stroke of a sword, each blast of fiery magic must be endured beyond exhaustion. For once the clouds of destruction clear, lands will have been transformed, new armies will have been forged and the cheers of the liberated will resound throughout the land.

The day of reckoning has come...

Only one race shall claim victory. Only the chosen will survive.

Disciples: Sacred Lands is a turn-based RPS game in which four realms-the Empire, the Mountain Clans, the Legions of the Damned and the Undead Hordes-are fighting for control of a vast fantasy world.

You begin the game by selecting a race, each with their own advantages and vulnerabilities. Once you have chosen your race, you will need to select a lord who will lead your party in battle and who will grant your party certain abilities. The Warrior lord will lend strength; the Mage lord will provide magic; and the Guild Master (Thief) will grant leaders the special ability to poison enemy garrisons, spy on races, and steal valuable items and spells from enemy cities.

When a lord has been chosen, you are required to build your party and start your quest. Beginning from your capital city, you may set forth on single-mission quests or multi-mission sagas that contain varying objectives. Each turn consists of entering into combat, developing your capital city, acquiring resources and casting spells.

In the Sacred Lands, survival depends on controlling territory and acquiring resources. The goal is to transform the land to reflect your God's influence. In doing so, you may occupy neutral ground, plant magical rods in enemy terrain, or deploy units to slowly erode the enemy's economy. The challenge lies in obtaining your resources, for you must first conquer the land in which they are hidden before you can put them to use.

Unlike any game in its genre, Disciples breathes new life into the role-playing experience. Your units are not disposable. Experience is not bought, but rather gained through combat. Upgrade levels and direction of succession are also dependent on the buildings you add inside your city.

Through this new dimension in character development, units must be nurtured in battle so that they can move forward through multiple levels of progression. Once you have completed a saga, you can take only one leader to the next chapter and begin to rebuild your party once again. This gives you, the player, a sense of loyalty and attachment to your characters.

In addition to a powerful scenario editor and multiplayer action with up to four players over LAN and Internet, Disciples has a wealth of tactical and strategic options available to you. With over 120 party members and leaders, 35-40 neutral characters, and over 100 spells, the sheer staggering number and variety of units opens the mind to endless possibilities.

Praised to be the best turn-based RPS game of the year, Disciples will immerse you in a world where victory will inspire you, evil will haunt you and the sound of clanging swords and screaming demons will keep you returning... to the Sacred Lands. 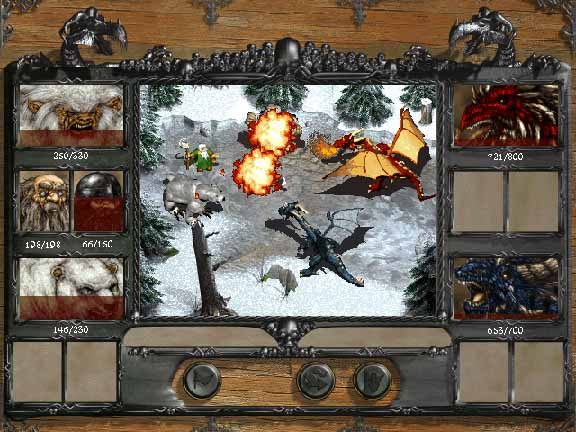