The presented conflict is between Core and Arm. Core being the government who imposed the requirement of turning people into robots (full robots, not cyborgs) by transferring their consciousness into robotic husks and attaining some sort of next step in human evolution. Arm are the people who wanted to continue living on as humans, but of course the government didn't take a no for an answer. The conflict obviously has escalated quite a bit from that. Both sides use remotely controlled robot armies to wage the war, so there are no lives lost on either side except for the commanders if they fail to escape.

The graphics are no longer the best in the market, but they're still gurgeous, with fully animated polygonal units, and incredibly rendered terrains. The soundtrack is orchestral - literally. The basic game has nothing less than 150 units, there's more in the expansion pack Core Contingency, and yet a dozens more free for download, all of them made by the developer, and in the Internet you'll find thousands of third party not only of units, but also of maps, AIs and lots of other goodies.

And the gameply... oh, the gameplay... Hundreds of robots, planes, ships and tanks involved in huge battles at the same time, with amazing explosion effects for incredible different weapons, including inter-continental plasma cannons and nuclear missiles. Command squadrons with as many units as you like to storm an enemy outpost, or build plenty of defense buildings to not get hammered. Since there's land, water and air units, you'll have to plan very well your advance through the map till total annihilation of your foes.

That's not to mention, this game was the very first to introduce nice concepts, now present in every strategy game, such as wind that has influence on the shots' fly, higher ground grants plenty of advantage, specific air-to-ground and ground-to-air weapons, detailed unit behavior control, and the list of advances goes on and on...

To finish: I urge you to play this game. You may love it, you may just like it a little, but there's no way you will hate it. It's not for no reason that it's one of the only games ever that has a very active community even after the developer company exits business. In some last worlds before they would go away, they shared some words with Total Annihilation's fans, both players and third party developers: 'You guys are the Cavedog now'. 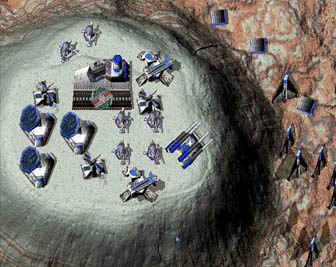