In Army Men: Advance, the despicable Tan General Plastro whips up another fiendishly clever plan for world domination, so it's up to Sarge to rally his men for another valiant attack. Players will guide Sarge through 17 clever environments, occasionally using tanks or gunboats to terrorize the Tans. 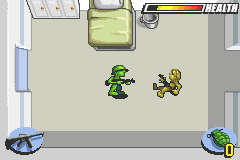