Baldur's Gate: Dark Alliance combines fast-paced action and adventure in the popular world of Baldur's Gate. It features an epic tale of intrigue, alliances, explosive spell effects, and highly detailed creatures and environments, and allows for both single- and two-player cooperative play. Characters are customizable, each with unique powers, appearance, and abilities.
This is the first console game to feature Dungeons & Dragons, 3rd Edition rules in real time. The game features Dolby Digital sound, comprehensive voice acting, and a completely original soundtrack.

Sanguine # 2009-10-07 09:29:41
Black Isle Studios is mentioned but their involvement is not elaborated.
Virgin Interactive Entertainment worked as exclusive distributor in Europe.

pop-up mooks - only some

--- averted
hazardous powers / safe powers - fireball is harmful to the caster, but meteor swarm and flame "shield" isn't. the others dont't have the capability for harming the caster (based on visual feedback). As such, this is too mixed case to mark as either. 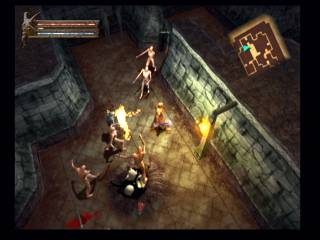