You are Nick Vrenna. It is the year 2009. You have been
falsely incarcerated inside a high security underground
prison where illegal genetic experiments are taking place.

Alan Blake, the head research scientist, has isolated the
specific gene which causes violence and aggression in
humans. This genetic sequence, called 'Abuse', is highly
infectious, causing horrific transformations and grotesque
side-effects. You are the only person to show immunity to it

A prison riot erupts, and in the confusion all the cell
doors ar opened. Soon everyone, guards and convicts
alike, become infected and transform into a horde of
mutants which take over the building.

Your only chance for escape is to don battle armor and
reach the Control Room situated in the structure's deepest
level. You must first stop the prison's Abuse-infected
water supply from contaminating the outside world. Freedom
and the fate of the world now depend on you.

This game brought new innovations from the 3D shooter back to 2D games. Such as aiming with the mouse while moving with the keyboard. Originally the game was for MS-DOS and Linux. Origin (was sold to Electronic Arts by then) was the original publisher. 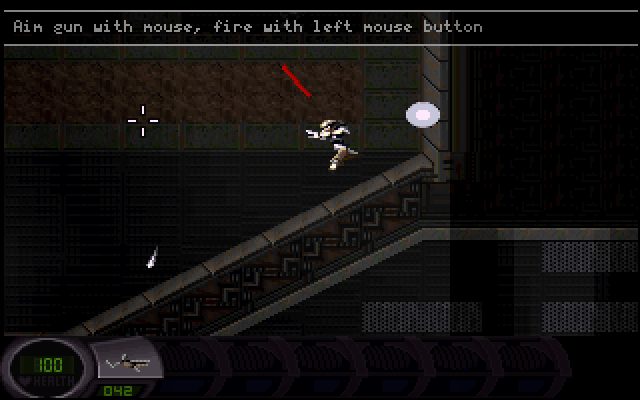