One of the most important and best-selling games in history. This game was the #1 reason to buy a NES console in its early days. Perfect controls, nice graphics and sounds for its time. Varied levels with many secrets. The major breakthrough for side-scrolling platform games.

Super Mario Bros. is the pinnacle of pure, unblemished gaming. The 2D platformer, designed by Nintendo's legendary figurehead Shigeru Miyamoto, still remains in our minds the most intuitive and addictive entry in the genre. The title stars "Jump Man" himself, Mario, along with his brother Luigi, and takes players through more than 30 colorful levels of varied theme and design, all of them packed with cute, stylized enemies like the goombas and a wide array of platforms and obstacles. Super Mario Bros. is the first major showpiece for Nintendo's heightened quality of gaming: full of depth, layered with tight control and remarkably clever level creation that spills with secrets and extras.

Guinness World Records reports this game as the best selling game of all time at 40230000 copies.

Tags
Landing squarely on an enemies head to defeat them is the first and most common tactic in this game. It was available at the launch time of the NES in the USA (Famicom?). It stars Mario the plumber. he main plot includes rescuing the unfortunate Princess in distress, and saving her kingdom; which is threatened by Bowser. Successful completion of the game completes a story of deliverance. Other royal subjects can be rescued optionally. The common bricks in the game can be smashed directly or by hurdling enemies at them. Although a glitch, Mario or Luigi can preform wall jumps. 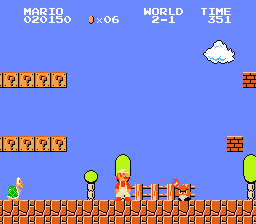