It is no secret that the US/EU version of Super Mario Bros. 2 was just a slightly edited Yume Kojo Doki Doki Panic version, because Nintendo thought the Japanese Super Mario Bros. 2 version was too difficult for non-Japanese audiences (My personal opinion is that it proved to be too hard for Japanese people as well and Nintendo got a good amount of negative feedback and didn't dare to make that mistake again in the US). Besides the characters some other minor graphical details were improved, but the game stays basically the same. Controls are very good and I think it makes a worthy sequel, more so than similar "black sheep" sequels like Zelda II The Adventure of Link or Castlevania II Simons Quest. Interestingly this game was also released on cartridge in Japan in 1992 (late in the Famicom life cycle) under the name "Super Mario Bros. USA".

The American and European Version of Super Mario Bros. 2 has its roots in the Japanese game 'Dream Factory: Doki Doki Panic'. It was released in Japan in 1992 as 'Super Mario USA'. 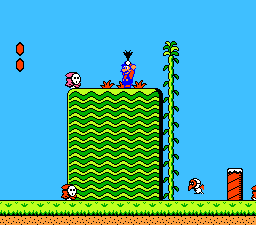