David Crane came up with the idea when he saw someone attempting to cross Chicago's Lake Shore Drive during the worst traffic of the year, do to the Consumer Electronic Show that day. Someone at Activision objected to people being struck by cars. As would everyone, especially the players, since the object was to avoid the cars. Anywho chickens were acceptable for running over and replaced the human characters. 'Bloody Human' is the name of the original, unpublished version with humans, which is available for play on emulators. Mr Crane insists that this game is different from [[game:Frogger]]. 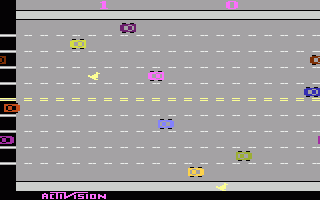