This is the game that makes a 2600 worth owning. Pitfall is an adventure game classic. Gameplay is simple yet challenging, repetitive yet enduring. In an age of multi-level 3D gaming worlds, Pitfall has yet to be equaled.

David Crane originally designed the game with an entirely mortal Harry (1 death ends the game). Sadly, two weeks before production, he made the game easier by giving Harry multiple lives. Still, this is one of the most challenging games for the 2600, very few gamers have gotten all 32 treasures in the alloted 20 minutes. The world record for the fastest time is 18:52. (1:06 left on the clock). The best player in the world can only achieve a time that is 5.66% faster than required.

A 'Perfect Game' can be achieved by collecting all 32 treasures and never dying, never falling and never being damaged by a hostile object. The resulting score will be 114,000. There are 256 screens that connect end to end (screen 1 connects to screen 256). The underground (tunnels) skip around the ring of screens in a different order than the overworld. You can go left or right on any screen that doesn't have a brick wall in the way. The general consensus is that it is easier to go left from the starting screen because of the direction logs travel and dying starts you on the left side of the screen. However, to take the most efficient path to get all the treasures in time, start by going right. Also, unless you have a photographic memory, make a map.

There are many hacks available for download. Here is a few of the notable ones.
Pitfall Trainer: Timer removed & INF Lives, usefully cheat for cartography and practice.
Jungle Jane: A faster, meaner, better sounding, more colorful version with a female star.
Enhanced Pitfall +: 3 levels of difficulty, including 'Practice'. Scorpions climb ladders and travel screen to screen. There are additional treasures and enemies. Underground tunnels are smaller.
Bottomless Pitfall: Graphically enhanced. Can't go left from the start. Logs roll both ways. You restart a screen (after dying) from the side you entered. 10 hour clock and unlimited treasures, so a maximum scores are much more varied. Harry has hit points.

The rattlesnakes are not out of place in this game's setting, they are crotalus durissus, found in most countries in South America.

has influenced
The Simpsons: Bart's House of Weirdness (MS-DOS)

has this clone
Trapfall (Tandy Coco) 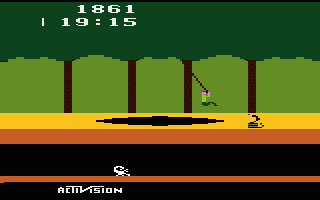