The player must maneuver their jet plane up the river just inches from the surface of the water. So low that the plane can collide with the banks of the river or canyon walls in some places. The goal is to shoot all enemy ships, helicopters, bridges, planes, and fuel tanks and do not collide with them. Also, fuel can be stolen from the tanks by flying over them, this is necessary to keep the player's jet flying.

While the game does not have a proper ending, there is an obvious point where there is no more to be seen.
The river is an endless loop and decent players will be able to advance far enough to see the section of river they started at, perhaps even multiple times. The 'end' of the loop is a climatic as it is the most difficult section of the river.


Tags:
Has the honor of being the very first videogame the BPjS indexed for being a danger to minors (the official BPjS comments are included in another article in this game entry). Carol Shaw is a woman. This game was included in the Atari Flashback 2.0 multigame standalone console. Enemies include pontooned helicopters.

In 2002 River Raid was removed from the BPjS index. Being an child agent of annihilation, with paramilitaristic training, cramps, anger, aggressiveness, erratic thinking, and headaches is now "Suitable for Everyone".

"Minors are intended to delve into the role of an uncompromising fighter and agent of annihilation (...). It provides children with a paramilitaristic education (...). With older minors, playing leads (...) to physical cramps, anger, aggressiveness, erratic thinking (...) and headaches." [English] 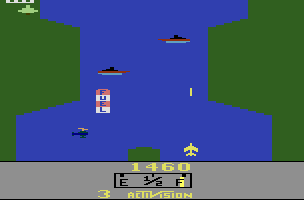