With your robotic ninja you have to hack and slash your way through 5 stages filled with hordes of villains to finally meet the endboss. Pretty straightforward gameplay without any surprises. The graphics are average, the background quality varies. The game never reaches the graphical standards of the original arcade version. They also could have implemented more standard enemies, because after some time you will be bored to slay the same types of enemies through all the levels again and again. The games difficulty lies mainly in the nasty time limit and not so much in the enemies, which are quite easy to beat once you understand their simple attack patterns. An overall average game.

port of
The Ninja Warriors (Arcade) 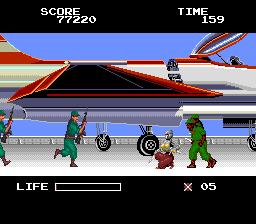