This game is your typical Beat’em Up fare, except you get to kick ass with the Sailor Moon girl of your choice.

Like most Beat’em Ups, you have your basic attack, hold, and unblockable move that hurts you if it connects. You also have a limited amount of super moves that will instantly kill any non-boss enemy on the screen.

Graphically, the game is pretty decent, as is the sound, but the animation doesn’t really seem all that fluid, which makes a lot of attacks look jerky.

As for the difficulty, it’s laughable at first, but by the time you get to the Crystal Tokyo stage the game becomes merciless. Unless you pull out some sweet Sailor Kung Fu, soon your last continue will be gone and the Black Moon UFO will triumph. Tuxedo Mask would be ashamed!

(cjlee001) - # 2007-01-04 08:22:01
A Final Fight-esque game, based on the first season of the Sailor Moon anime. Battle through the streets of Tokyo, an amusement park, and even the ruins of the Moon Kingdom en route to a final confrontation with Queen Beryl. Fans of the series will enjoy catching all the visual references to people and events from the legendary anime. 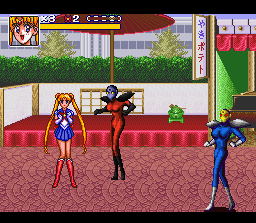