This is the last Capcom's hardcore fighting games, following the tradition you can see high jumps, aereal combos, hyper combos, ... nothing new...BUT!

2nd: Helpers!
A lot of Capcom's and Marvel's characters to select, including
Cyclops, Rogue, Lou, Shadow, Thor, Colossus, ... (really a lot of them). You can call them and help you to finish your oponent.

4th: A new battle mode.
My favorite one. Following the line, you can earn level (for hyper combos, like X-Men vs SF, MSH vs SF), the new mode
consists in a 2 on 1. YES!, you read well 2 on 1. You can play with your two fighters at the same time against your oponent and if hi want to... Yes, all the four fighters in the screen. Only think about it!

5th: No more Apocalypse or Cyber-Akuma, this is the time for Onslaught (A combination of Magneto and Professor X) 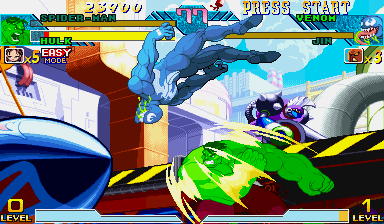