A battle of the pretty boys. 9 of the Gundam Wing mobile suits face off to fight for...well something or other. There's some execellent animation on the gundam mecha, and especially on the overly flashy extreme moves.
The Two Mix intro is almost recognisable on the SNES. The game's a lot of fun to play, though the there's not much long term lastabilty hiding within the cart.

The very first project I ever attempted, Gundam Wing is an extremely well-done fighting game for the SNES. Featuring ten mobile suits from the Gundam Wing anime, you pick one and basically play Street Fighter Alpha with it. The graphics are good, the fighters are big, the moves are simple to pull off, and the final boss is cheap as hell. 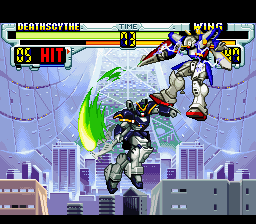